The Writing of Arthur Klepchukov

The barricades on Hrushevsky Street, the site of one of the worst battles of the Maidan (as of February 1, 2014). The black clusters in the distance on the far left, are Berkut behind their shields.

Seeing Maidan in person left me in a state of mild awe. How can so many souls come from near and far, gather, organize, donate, protest, fight, break, bleed, die, and wake up to do it again and again for months? There must be something here, something about these folks with a sacrificial focus. I would not believe the sheer mass and force of this effort unless I took in every street with my own eyes, smelled the barrel fires on the winter wind, tasted the smoke of recent battles, heard the whispers of the hurt, or touched the weapons used against those who stood here, in the face of faceless oppression. Danger be damned, I regret not coming here earlier. All the parts of me that sat in that airport on the other side of the Atlantic and hesitated to board my flight melted away. I wish I went at the start of this trip instead of the very last day.

I’m proud of these people. All of them. I’ve never felt sympathy or anything particularly positive about nationalism, patriotism, living in any of the dozens of places I’ve lived, or even being on any kind of team. Today, I got my first taste of what gets others so fired up about a shared idea. I felt what holds them together. Today, I stood in the middle of something vastly bigger and more important than myself, a witness to a change more important than any I’ve experienced and that will affect many more people than I can ever know. And this wasn’t an abstract political idea, or something frivolous and fleeting like a sports game, or imagined like a film or a painting or a book or a startup spreadsheet or university research project. These weren’t curated images on the news. The effects were immediate and real. I could see it in the faces of the grandmas handing out free meals, the men younger than me in half-winter, half-battle gear patrolling every barricade and the entrances of every conquered building, in the spray painted fervor on the signs and the shields and the banners and the doors masking the downtown materialism, in the crass caricatures and beautiful pieces of art being painted in front of me, steps away from where protesters died, in freezing winter temperatures, in the hands of the inspired, who refuse to leave in spirit and in body.

All of this stirred faith in the power of a commoner exercising a fundamentally defiant right to say: Enough. It’s time for change. I left Ukraine at eight-and-a-half years old and grew up with a healthy skepticism of all things Soviet and post-Soviet. I believed that the Slavic people of my birthplace were an inexcusably tough and unpleasantly cold, uncaring people. I am proud to be so gloriously wrong. I am proud to glimpse at a place I feared, that almost made me cancel this trip, and open my heart to it’s wonder and woe. I am proud to have faith that change is not only possible but inevitable, because that is the will of the wronged. Now, I am proud to share a heritage, a history, a spark, no matter how tiny or distant or morphed by Americana with these people, my people. Today, for the first time in my nomadic life, I’m proud to say: I am a Ukrainian. However brief, I stood with my people and I belonged.

This is not my fight. I realize that all this passion may be the sentimental first impressions of a naive boy lucky enough to grow up sheltered in middle class America. But whatever it may be, I had to share this day. I owe an enormous debt of gratitude to the family friend who gave me a two hour walking tour of every major place of protest. She was there every step of the way since November 22, 2013 when this started and wouldn’t let me explore alone. At the end of our time, I put every dollar in my pocket in her purse and said, “for Maidan.” What was supposed to be a thoughtless wedding gift to my sister before I learned she was marrying into wealth became the first donation of my life. It felt subpar to what I considered donating: a missed return flight and an indefinite stay in this dangerously inspiring place. Wherever this takes me, however idealistic this may all seem, I never want to forget how my heart beat differently on the Maidan as I read signs like: “The will of Ukraine or death” and “better a coward on the Maidan than a coward behind the TV.”

Some things you have to experience in person. So find the courage to take a risk. You may be stunned at how moved you are by a solemn civilian soldier with a bleeding cheek, snowflakes on his steady breath, the smell of burnt tires rising from his feet, defending his idea of tomorrow.

Remains of weapons used against the Ukrainian protesters on the Maidan: rubber and metal bullets, concussion and stun grenades wrapped in shrapnel-to-be, and skin-splitting rounds for maximum blood loss. 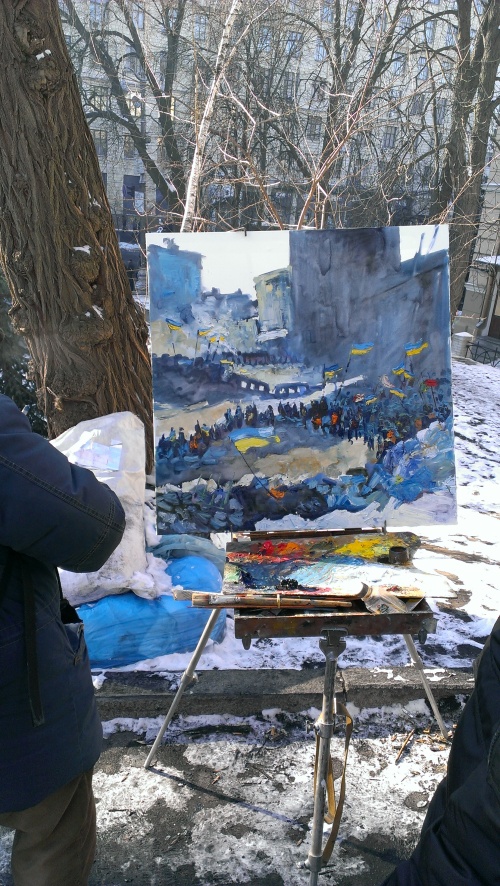 Some people can’t help but create amidst all the destruction. The outpouring of art, including this painting-in-progress at subzero temperatures, was stunning.

This site uses Akismet to reduce spam. Learn how your comment data is processed.